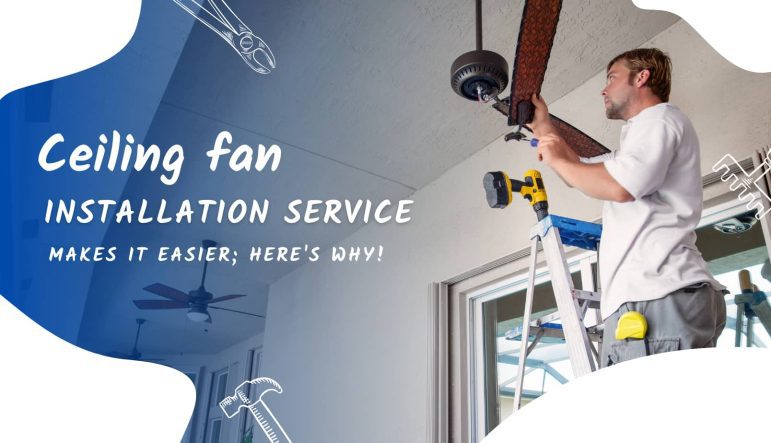 Though we all mostly rely on air conditioners, the popularity of ceiling fans has intensified. Many owners have discovered the dramatic year-round saving of installing ceiling fans; one, you’ll get the cool breeze in summer, and second, this will reduce the strain on your air conditioning system. But installing a ceiling fan is not as smooth as the air it produces; it requires carefulness and skills. That’s why homeowners avoid DIY and go for ceiling fan installation services. Hiring a professional would be best if you want to replace or install a new fan. We’ll talk further for many reasons; this might tell you the importance of hiring a handyman for regular home tasks. For now, let’s know…

Why is installing a ceiling fan a better option?

It is no secret that installing a ceiling fan always helps you save an extra penny; it not only adds an exciting element to your room but fills it with a cool breeze. Here are some reasons why one must invest in ceiling fans;

Ceiling fans create this chilly ambiance and wind-chill effect in your room, allowing you to save energy. Even in winter, a ceiling fan can help to circulate the warm air produced by the HVAC system; every nook and corner of the space will get a shared amount of heat. It is a wise investment!

Obviously, installing ceiling fans features energy efficiency then it is apparent that there will be a decrease in the energy bill you have been paying so far. Less energy consumption means more money you save on energy bills!

Do you know ceiling fans can even extend outside; many house owners are now choosing to install fans on their porches, decks, and patio so they can enjoy the fresh air in specific weather.

Yes, there are ceiling fans available that offer lighting fixtures too! And then comes the exciting light controlling options like; up lights, downlights, multi lights, and blow lights; this makes your space look amazing! Isn’t it great that your space gets lightened up entirely if the light is placed in the center (over the fan)?

What are ceiling fan installation services?

Installing a ceiling fan seems handy and a do-it-yourself task, but you must take care of multiple aspects. Whether you want to install a smart doorbell, electric fan, or any other appliance, hiring a handyman is always right. When it comes to installing the electric fan, here’s how we work;

Before anything else, professionals first turn off the electric circuit, then remove the globe from the old light fixture. After that, they unscrew the nut and screws which hold the fixture to the ceiling. And then finally lower the fixture, and disconnect the wires by twisting the plastic connectors.

This process is completed by setting up the box into the hole cut through the ceiling and pressing it against the joist’s underside. Further, the handyman will wrap the copper wire around the grounding screw inside the box and keep it hanging down the ceiling.

Applying a bead of adhesive, the handyman will glue on the ceiling medallion, pass the wires through it, set the nailheads, and fill it with spackle. Furthermore, by holding the fan’s metal ceiling plate up to the box our expert will drag the wires through its center hole.

The last step always remains to assemble essential components of the fan, attaching them and connecting the wires as needed. Arranging wire through the rod pipe towards the fan’s motor, joining wires, and attaching the blades and lights; the handyman will also install the shades and light bulbs.

We at New Orleans Handyman offer ceiling fan installation service which is best for you for a reason! The tools we are usually equipped with are Nailset, Drill, Driver, Hammer, Caulk gun, Screwdriver, Drywall saw, and Wire stripper. Also, we ensure safety and perfection; no chance we’ll disappoint you with our services; try it!

No comments to show.